The unexplored rawness of Sahydri! 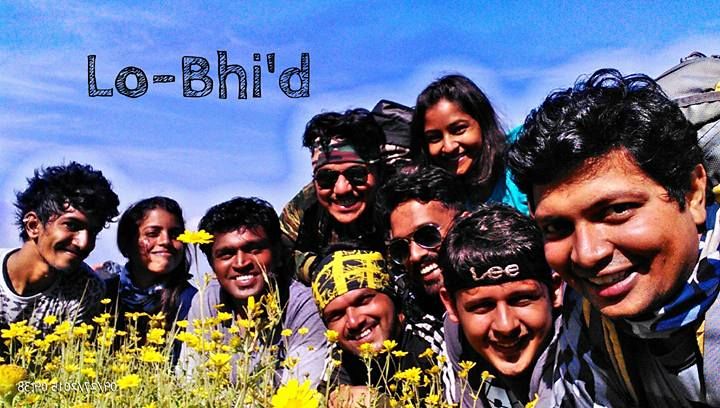 Who cares about the destination when the journey is so beautiful. The Gang of LoBhi(few missing)

Some treks remain special throughout the life and such treks with a bunch of closest pals is like "sone pe suhaga" (icing on the cake). This was my third LoBhi trek and even made further 4 LoBhi treks thereafter (always with TrekMates India) and every time there was something special. This year it was witnessing the fully bloomed Karvi flowers (Strobilanthes callosus) which generally bloom once in 7-8 years with all my closest friends. Lobhi..a range trek from Lonavala to Bhimashankar covers a historic trade route. The roads of that era can even be seen today at certain points.

The arduous trek started around 2 am from Lonavala station and we covered around 12-13 kms for our first halt at Valvand village, which took around 3 hours to reach there. The tar road soon turned into a stony way n further to a wild trail. In the dark pitch night, we kept on moving with our headlights and torches, encountering few snakes and scorpions. The belief "the more quick you walk, the more time you would get for the power nap" made us to reach Valvand sooner.An old woman (mostly in her 60's ) served us poha along with black tea. Seeing her doing all the household activities swiftly all by herself, we realized that Age is just a number. A short power nap provided the much needed rest. 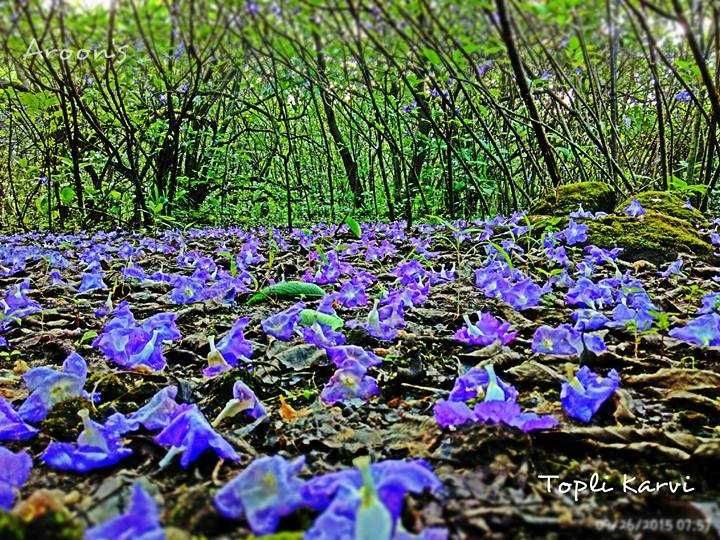 After the much needed rest, we left Valvand and headed for Kusur plateau. This patch is the most challenging one, not only in having a number of ascends , but also the route being quite tricky. The route was lined with Karvi and Sonki flowers. The combination of purple and yellow colors all around made the walk bit magical. Rajmachi and Dhak are quite distinctly visible en-route. while continuing the trek towards Dhak, there is only a right diversion which leads to Kusur plateau. 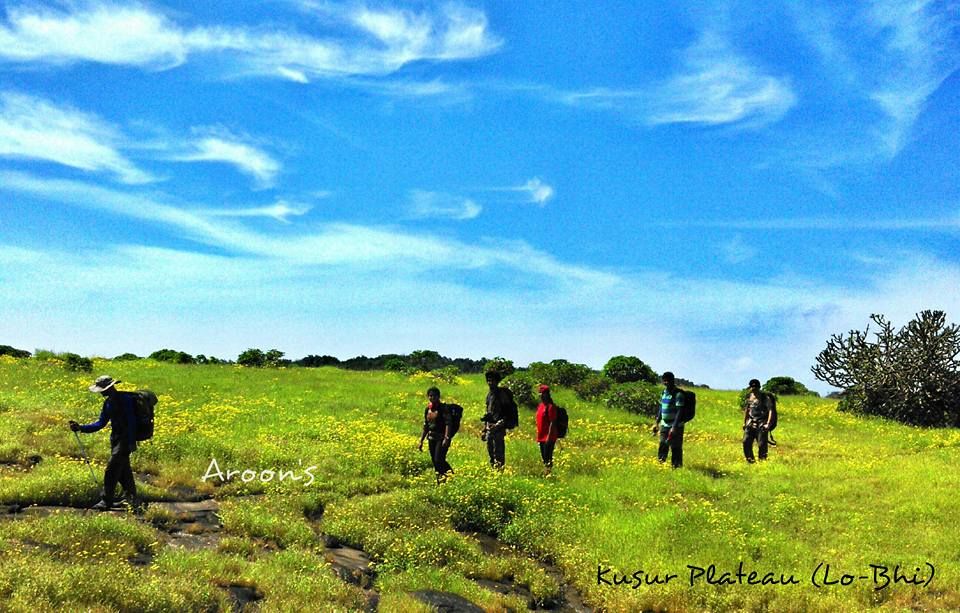 Kusur plateau is the most trickiest patch I have ever encountered. There is no one to guide you, not even a single soul except the old DD relay centre tower. At the base of the tower there are 2-3 houses, which was our next break point. Cautiously we moved ahead and the sky was quite merciful that we were able to locate the tower. Even on a sunny day, when the clouds play with you, covering the tower, it really becomes a nightmare to find the correct path leading to the tower. After around 3o minutes, we reached the place, rested for a while followed by the lunch . The villagers offered buttermilk and water. We then descended Kusur and the views all around were something to cherish for ever. Numerous waterfalls dotted the green mountains. 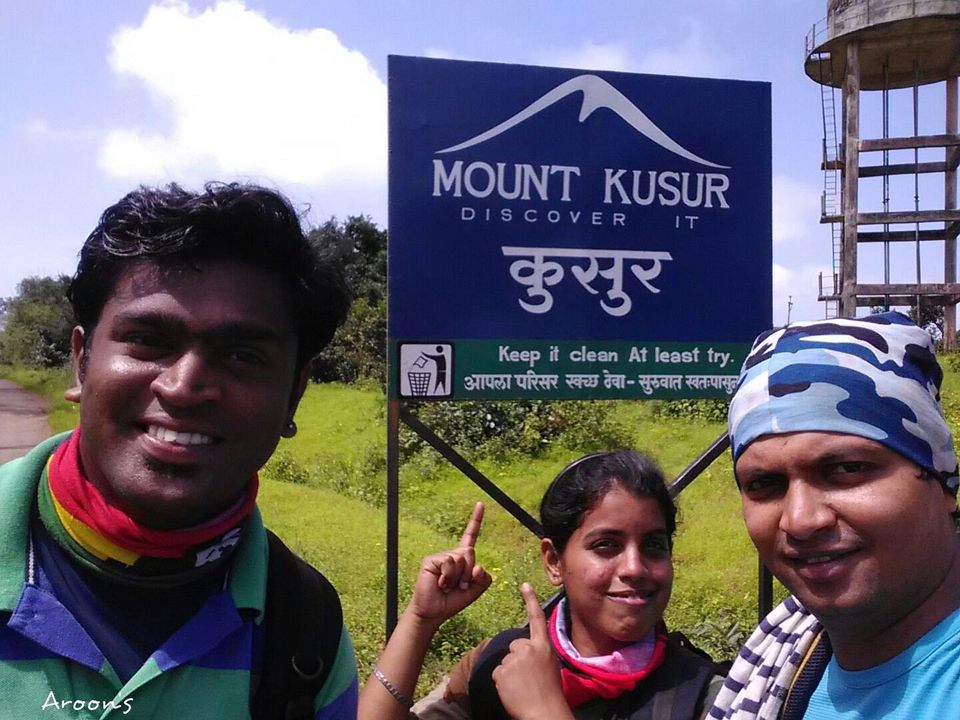 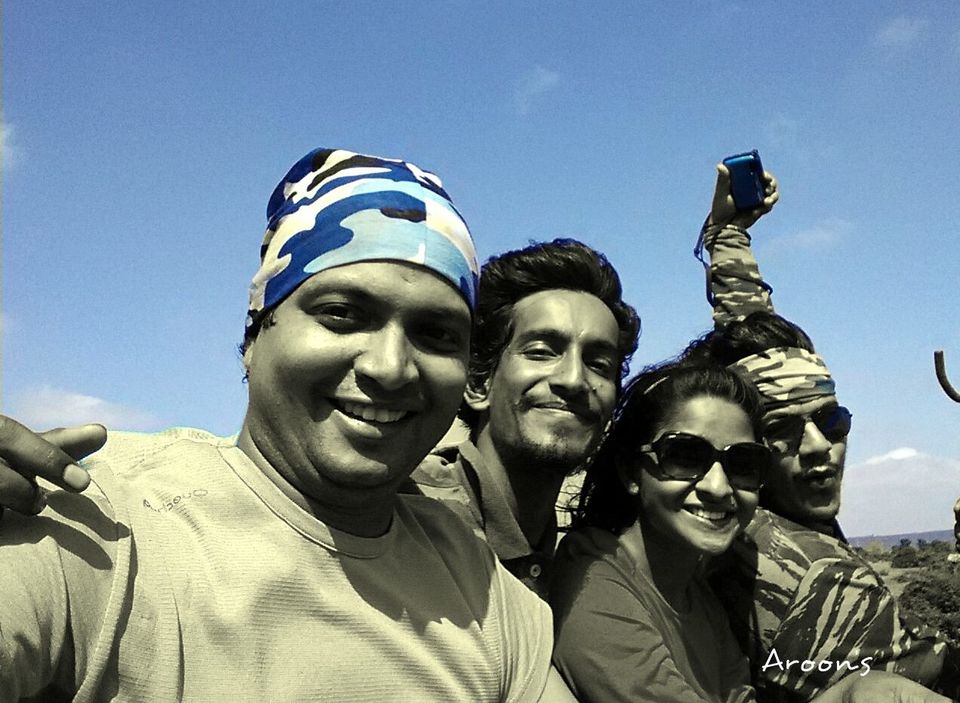 After a brisk tea break, we set out for the next destination. WANDRE Khind. We had prebooked a mini truck, which left us on a tar road,and we had to further hike to Wandre Khind. While majority of the people went inside the truck, Vaibhav, Yogi, Rasika and me sat on the front top part of the truck and I sweat we had the adventures of our lifetime.

We got down after around 30 minutes and started for Wandre Khind. The route was dotted with numerous waterfalls and lush green fields. The mountain was dotted with a number of windmills and it the views were a treat to the eyes. We took a lot of photos there. We had descended the Wandre khind and moved towards the last destination of the day:PADARWADI. It was already dark and we were welcomed by the barks of the village dogs. We halted overnight at the community centre of the village, though we also had the full verandah of a school. The premises of the school acted as the lone bus stop of the village too. Meanwhile the sole ST bus too had arrived, ready to move on early morning. After a stupendous dinner made by a villager, we slept off like logs of wood, and yes few tractors (read as snoring) ran throughout the night.

DAY: 2. I woke up at 5am, though few had already woke up n gone for the natures call. You hardly find the chirping of the birds and the sound of the streams everyday. The Sonki (yellow) flowers had blossomed just a week before and the green earth was being dotted with these yellow flowers. We had Poha and tea, and then we headed out for our destination. We kept a target of reaching Bhimashankar at around 1-2 pm. 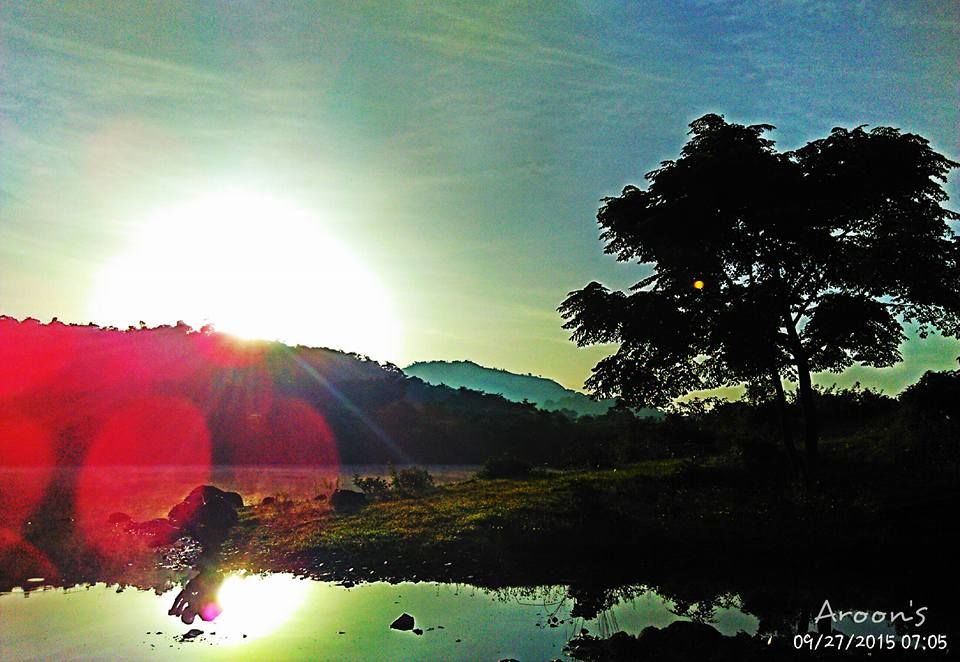 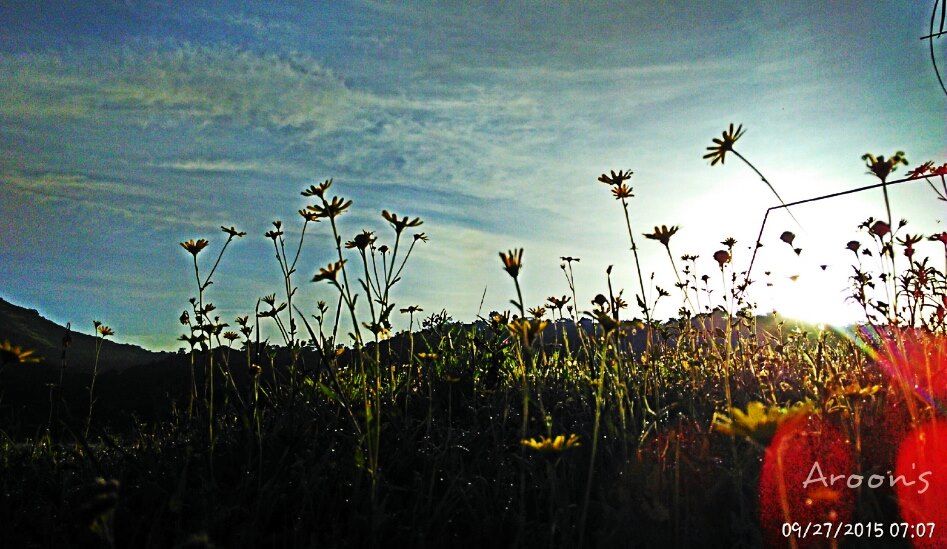 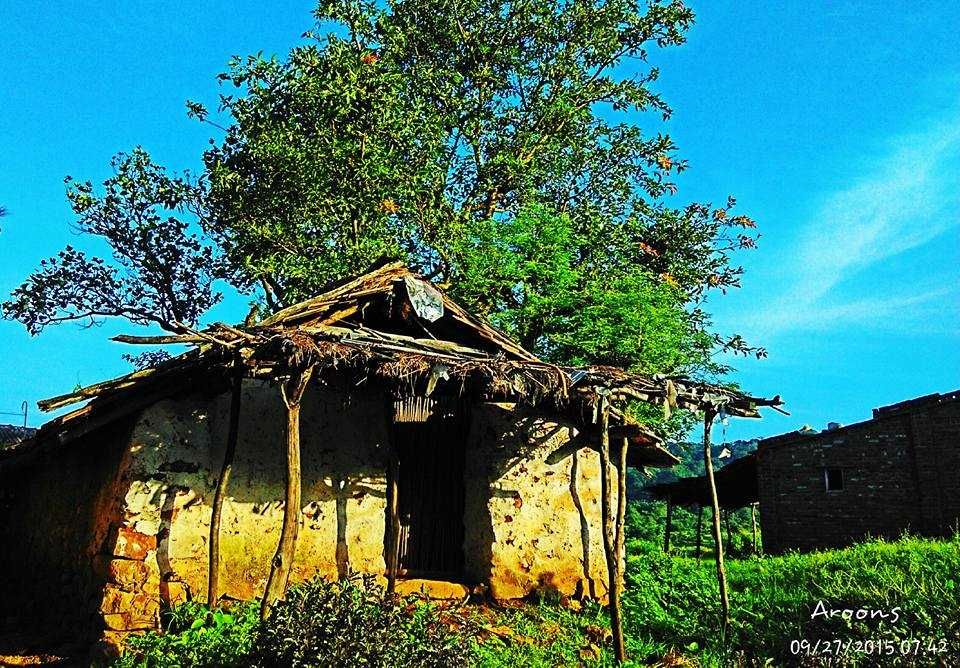 The group was perfect mix of people from different spheres of life. Vikram, Ranjita, Yogesh, Vaibhav, Rasika, Saurabh, Mohan, Sandesh, Dipali, Avinash, Kushal, Jaideep Sir, Ravi to name a few. There anever a dull moment. With majority of the participants being photographers n the climate being perfect supportive, it was really difficult to keep the momentum going. So few used to run a long way in order to catch up the gang. 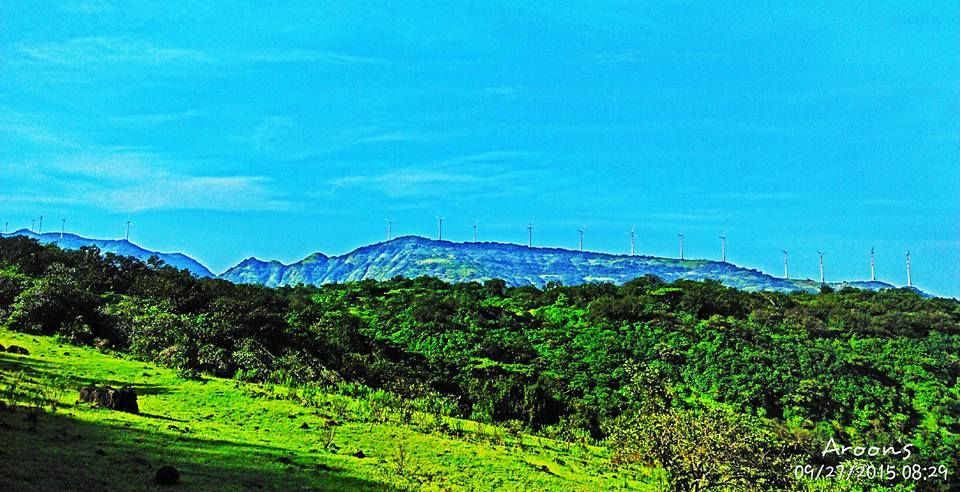 We trekked through the dense karvi shrubs, fully laden with flowers. Some parts of the forests were dense enough to prevent the sun-rays from entering into the jungle. A sense of satisfaction n peace can be found within while trekking such places. We halted at Bhoota-chi-maal. The Khetoba and the Vaijantri ghat trek routes connects here and moves till the KAMALJAI temple, which further leads to the Bhimashankar forest reserve. From Bhootachimaal,one can easily see the identify Peth(kothaligad), Padargad, Bhimashankar. 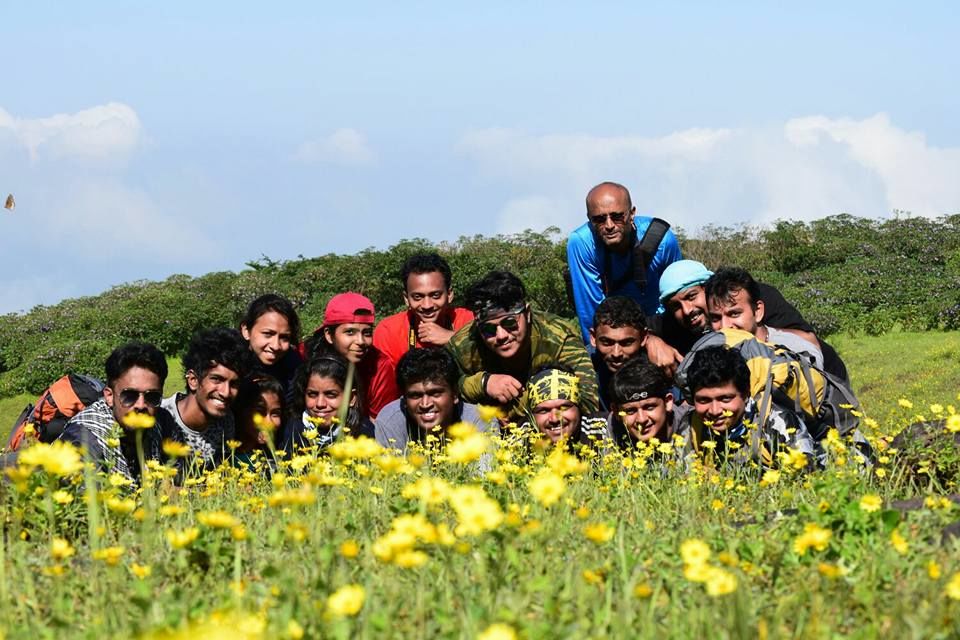 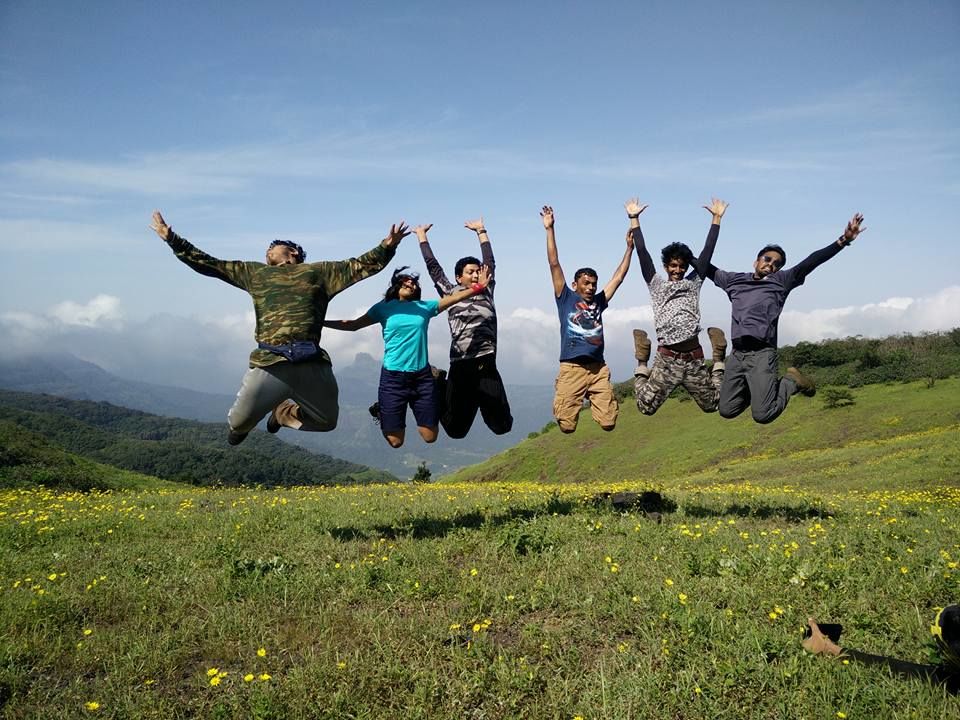 With few breaks and a pre-lunch halt at Kamaljai temple, we set forth to Bhimashankar. We crossed the waist deep Bhima river twice before entering the Bhimashankar Wildlife Reserve. The final ascend started towards Bhimashankar. The forests were quite dense. The sound of the water streams, insects and birds made a perfect combination. Some were lucky enough the spot the Shekru, the Indian giant Squirrel. Meanwhile, we reached the diversion of Gupt Bhimashankar (where the lord is inside a waterfall), but we skipped it owing to two reasons; we have been there many times and we were running out of time. We kept moving and with the increase in the quantity of garbage n plastics flowing down the river, it was evident that we were nearing Bhimashankar. After about 15 minutes, we reached near the temple. Being a sunday, the temple was crowded, so we made a quick darshan through one of the gates meant only for darshan. 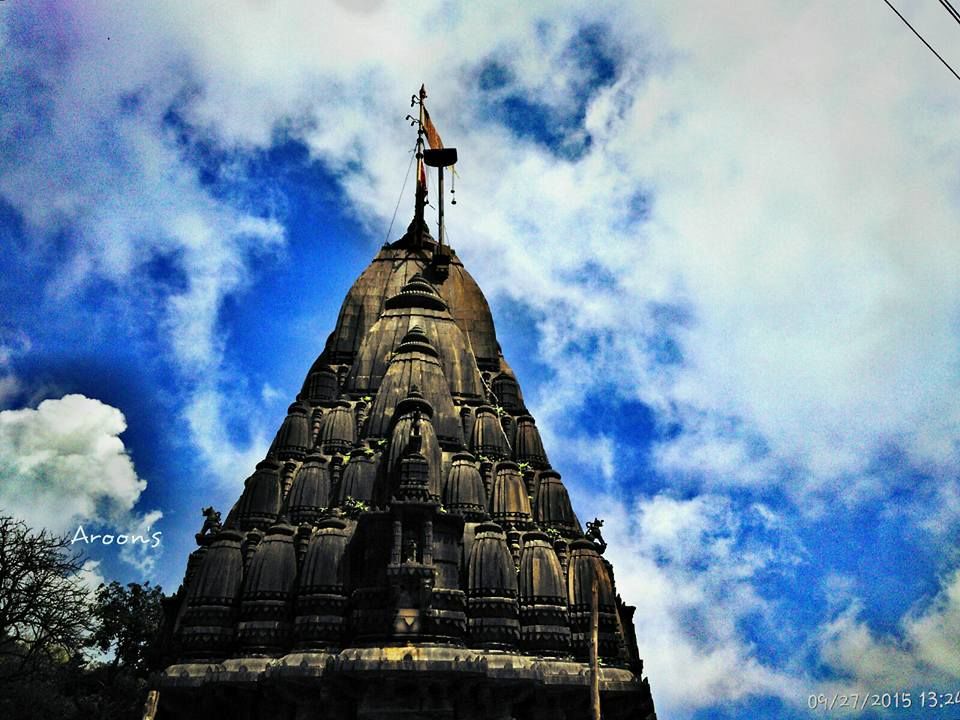 After some photo shoots at the gate, we headed for the nearest hotel for lunch. The trek was officially over. There were two options, either to the a bus till Mumbai or to descend down till Khandas, then a tempo ride to Karjat and a local train till Mumbai and obviously being trekkers, we chose the second one. The descend was though Seedi ghat or the ladder route. Seems every1 was on adventure mode. 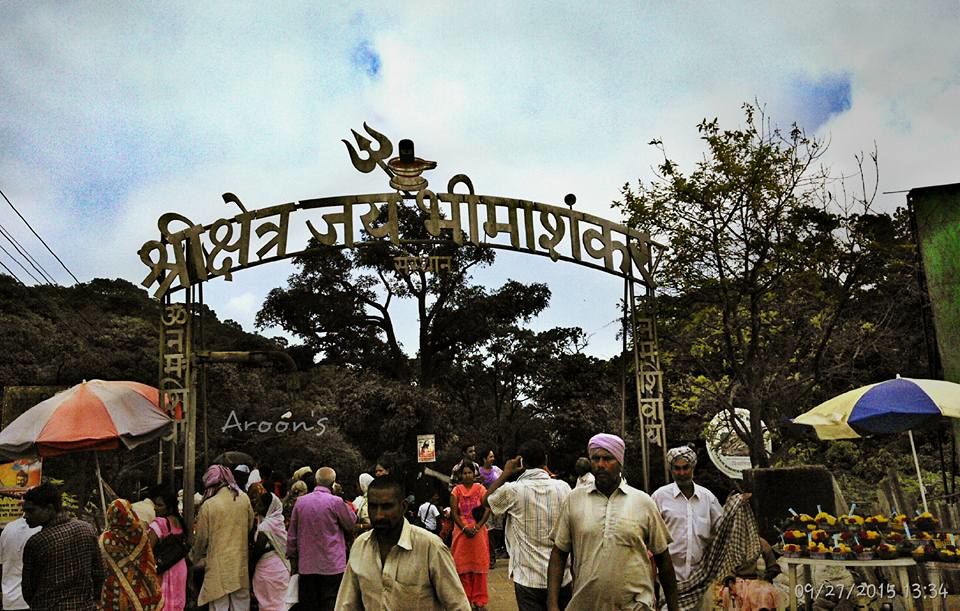 The descend was on a slow note due to the full stomach. Still we made sure not to take any breaks till the junction where the road bifurcates into Seedi and Ganesh ghat. Ganesh ghat route is comparatively easy but lengthier than Seedi ghat. Meanwhile we called the local tempo guy to meet us after one and a half hour. After taking the Seedi ghat route, we came upon the most thrilling and the adventure patch. Descending down the ladder rocks with a waterfall just to the right of us. We first moved on the bags, then the girls and finally one by one descended down. The view of PADARGAD (watch tower ) right infront of us was quite mesmerizing. A brief halt and again we moved on. Finally at 6 pm we reached at Khandas, where our Chota Hathi was waiting for us. 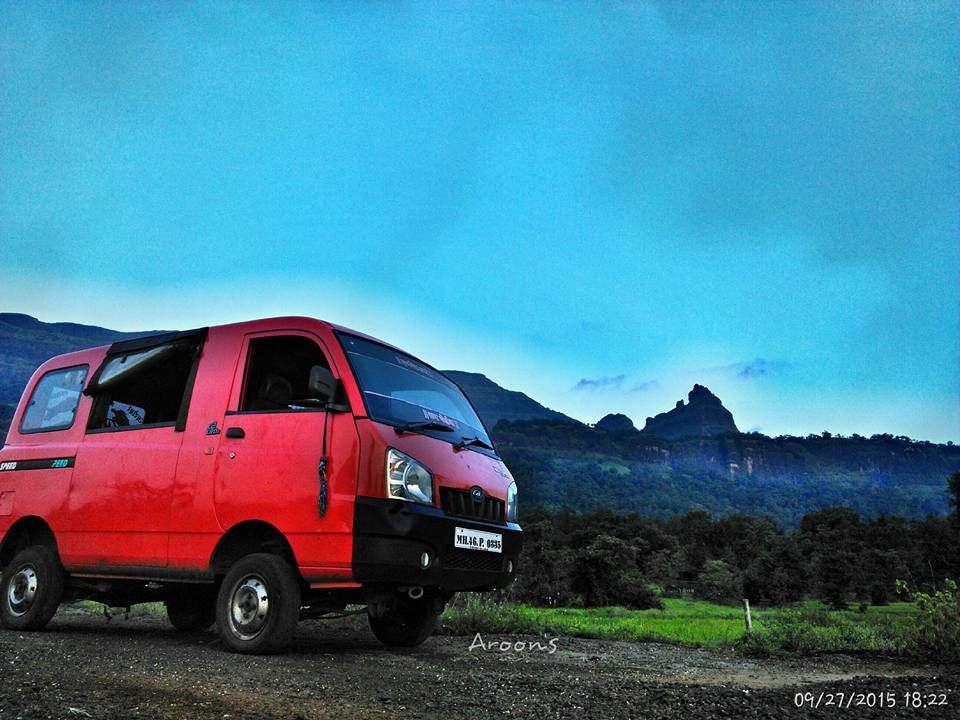 Few dozed off in the mini tempos, while the others started recounting their memories. Little did we realise that we were soon parting ways. The fun, laughter, gossips, poses and the craze all came to an end with a promise of meeting each other soon on some new trek.